The Red Eyes gang is a low-level group of thieves lead by a man who calls himself Big Red who regularly terrorize Champion City. During their attempted robbery of a retirement center, they are confronted by the superheroes Mr. Furious, The Shoveler and Blue Raja. They easily defeat the rookie heroes, but Captain Amazing arrives and engages them in a fight. They are easily defeated by Captain Amazing and are turned over to the police. 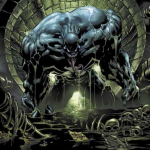